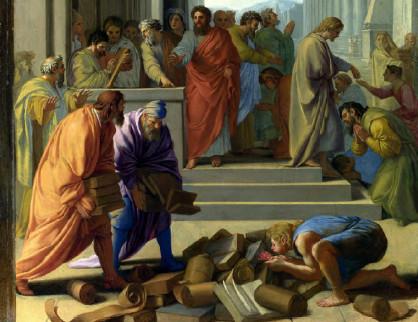 Next time you visit the
National Gallery in London walking through room 18 to be ex-act , pause for a
minute and try to find a painting called “Saint Paul Preaching at
Ephesus” by the French painter Eustache Le Sueur. The paint-ing in the
National Gallery is probably a sketch of the large-scale painting housed in
Notre-Dame in Paris. The painting of course depicts Saint Paul preaching at
Ephesus very similar to Raphael s painting Academy of Athens , but what is striking
is the scene in the foreground. There is a pile of books and scrolls with
someone clearly trying to put them into a fire. According to the New Testament
Acts 19:19-20 Saint Paul s preaching was so influential that a group of Jews
and Greeks who were practicing “curious arts” probably magic or
astrology gathered their books and burned them all. The New Testament even
gives us the value of the books: fifty thousand silver coins.  I do not intend to find any theological
conclusion or argue anything against or in favor of New Testament s story. The
only thing I would like to get from the painting is that by the time it was
created in 1649, the practice of book-burning or in a more technical term
biblioclaism was not as taboo as many consider it to be today.

We are all familiar with
the famous quote or rather the poem by Heinrich Heine: “where they burn
books, they will ultimately burn people also”. In this pas-sage of the
1821 “Tragedy of Almansor”, Heinrich Heine refers to the burning of
the Qur an by the Spanish Inquisition. In 1499 thousands of Arabic manuscripts
were burnt in the public square of Granada, where at the same time nonbelievers
were also put on fire; mostly Jews and Muslims. Ironically in 1933 when the
Nazis started their book-burning campaign, Heinrich Heine s books where among
so called “Un-German” and “de-generated “books and
condemned to be torched. Heine was right, in both incidents, the Spanish
Inquisition and Nazi Germany, book-burning tragically led directly to burning
of people. Heinrich Heine s words came to life once again 20 years ago when the
National and University Library of Bosnia and Herzegovina NUB was set alight
with its 1.5 to 2 million volumes and 150,000 rare books and manuscripts. On
25t and 26t August 1992 the NUB was attacked by Serb militants. 90 per-cent of
its collection was destroyed along with the complete interior of the building.
Only 10 percent of the collection was saved although it sustained severe water
damage. During the siege of Sarajevo which lasted from April 1992 to February
1996, thousands of civilians including children were killed. On April 1994
Federico Mayor, the Director General of UNESCO, called the destruction of the
library “an act of barbarism perpetrated in the context of a whole series
of assaults on the national heritage.” One may wonder why a national
library became a primary target in a military conflict. What could be achieved
militarily by destroying a library? I find the answer in Heinrich Heine s
famous words. Those who burn books are the same who burn people. In other
words, no ethnic cleansing mission is complete without wiping out the victims
heritage, their history and their culture. In the Srebrenica genocide alone,
units of the Serbian nation-al army killed more than 8000 civilians, mostly men
and boys, then raped the women in a classic case of ethnic cleansing. The
massacre happened while the UN Security Council through its resolution 819 had
previously declared Srebrenica a “safe area”. In July 1995 the Serb
army entered the city while it was being protected by Dutch peacekeepers. In a
very bizarre episode, Dutch soldiers not only handed over the city to Serbs and
left weapons, ammunition, food and medical supplies, they also traded 5000
Muslims who had been sheltering in their base for 14 Dutch soldiers being held
by the Serbs. The National Library was not the only victim of the cultural
genocide. Other libraries such as the university library of Mostar, 15,000
manuscripts from the Oriental Institute of Sarajevo and 50,000 books of the
Franciscan Theo-logical Seminary Library had been hit by the same fate.
Nevertheless, the NUB collection, as well as its Moorish style building, was by
far the most important. Among the few hundred manuscripts that were rescued,
was Bosnia s cultural treasure, a 14th century Jewish Haggadah known as
Sarajevo Haggadah. The illustrated book was the work of a Jewish artist and
calligrapher produced in Islamic Spain and smuggled out during the Spanish
Inquisition. Later during WWII the book was again concealed from the Nazis. In
an exemplary journey of 500 years, this book had escaped three major
book-burnings and genocides.

In recent years we have
witnessed a new wave of book-burning incidents. Last year President Obama apologized
to the Afghan people for the burning of copies of the Qur an by American
troops. He called the incident Inadvertent”. The top US and NATO commander
General John Allen told the media that the copies of Qur an “were
mistakenly sent to be incinerated”. Other similar stories such as the
American pastor who had planned to burn copies of the Qur an are also very
alarming. Obviously, the Qur an has been the tar-get of several book-burnings
in history among other Muslim texts and manu-scripts as well as Jewish texts.
But Muslims and Jews were not alone. In almost every other genocidal European
expansion, books and manuscripts of the target population were destroyed. European
conquests of the new world, which ironically happened at the same time as the
Spanish Inquisition also wiped out the ancient civilizations of the new
continent. These days, if you are curious about the 2012 phenomenon and the
“end of the world” as predicted by the Mayans, you should know that
Spanish conquistadors wiped out Mayan books too. The prediction about the end
of the world is interpreted from one of the only three surviving Maya codices
known as the codex of Dresden. It would be a great irony if from the entire
Mayan books, the only surviving one, is the one that has predicted our extinction.