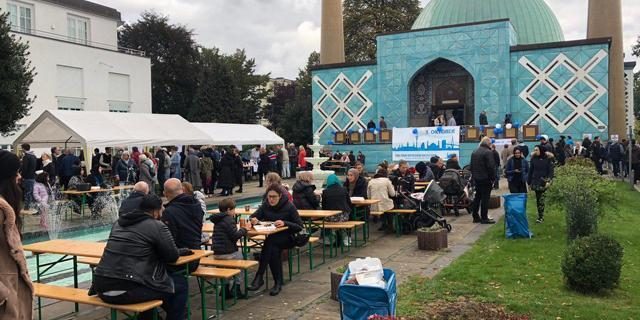 According to the tradition of the past years, this year, on Wednesday, October third 2019, the day of open doors ceremony at the Imam Ali Mosque was held with a significant attendance.

The third day of October, which is an official holiday in Germany on the occasion of the unification of East and West Germany, was designated in 1997 by the proposal of the Supreme Council of Muslims as “Mosque Open Doors Day”. This is a good opportunity for Germans and non-Muslims to get acquainted with Islamic culture and customs in the mosques. The Islamic Center of Hamburg, which is one of the founders of the name of this day, prepared special programs for it as well as previous years.

The Islamic Center of Hamburg is an important historical-religious place for tourists traveling to Hamburg, both Muslim and non-Muslim. This popularity is through extensive activities in conducting dialogue programs between religions in recent years, as well as the numerous documentary programs broadcasted about the center in German media. This also has a significant impact on the mass attendance at the mosque’s open day ceremony. It is worth saying that this year’s event was asgain covered by some of German media.

During the ceremony, which took place from 10am to 6pm, guides from the Islamic Center of Hamburg first gave full explanations about the interior and exterior of Mosque building. Visitors were then given explanations about Islamic beliefs and  they were then directed to the Academy Building and the Library of the Islamic Center of Hamburg, where the exhibition of Islamic-Iranian artworks and traditional Iranian products was held, and also where visitors would get answers to their questions while visiting the booths.

While reviewing the feedback and talking to a number of visitors, they all acknowledged that visiting the mosque changed their mental image and view of Islam and Islamic culture.

Other events were also included at ceremony such as:

-Holding an exhibition of handicrafts and oriental arts,

In the courtyard of the mosque there was also a space for entertaining children and welcoming guests with a variety of Iranian foods, tea and coffee.